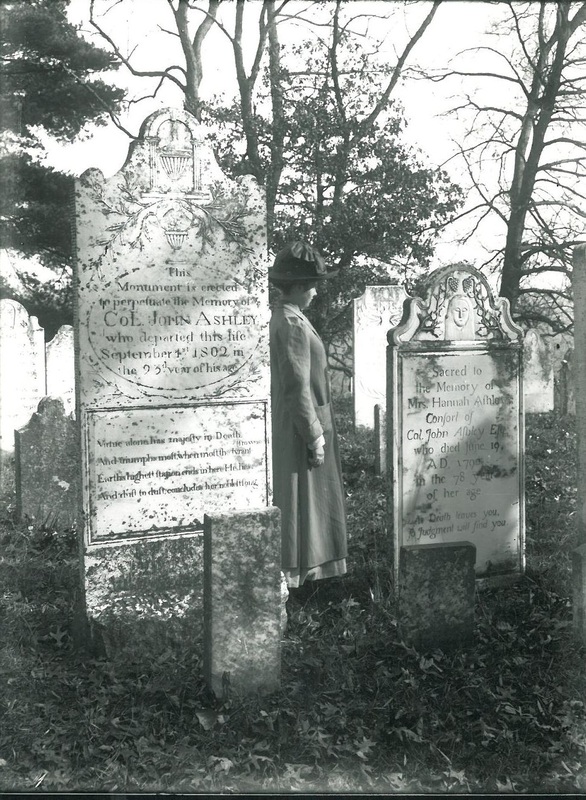 Learn much more about Colonel Ashley-Click here
Colonel Samuel Ashley, son of Daniel and Thankful (Hawks) Ashley, was born March 20, 1720, in Westfield, and died February 18, 1792, in Claremont, New Hampshire. He was about seven years old when his father died, and went with his mother and stepfather to Northfield, Massachusetts.

With his brother Martin and others he was one of the original grantees, under the Massachusetts charter, of Winchester, which is now in New Hampshire. The settlement of the boundary line shows this to be in the latter colony, and the charter conferring to the original grantees was obtained from Governor Benning Wentworth of New Hampshire. Samuel Ashley settled there with his stepfather, Captain Willard, and others.

While in Northfield he had occupied lands which proved to be in Hinsdale, New Hampshire, and was one of the petitioners for that town, August 29, 1753. He was a petitioner and grantee of the town of Windsor. Vermont, in 1761, Shrewsbury, Vermont, in 1763, and Claremont, New Hampshire, in 1784. It thus appears that at the age of forty years he was an influential citizen and large land owner, a wealthy man for those days. He was an officer in the militia and a justice of the peace and one of three men in Cheshire county authorized to record deeds.

After the age of fifty-three he came into special prominence by espousing the patriot cause in the revolution. He had been a delegate to the provincial congress, and as representative from Winchester was at the session which met May 1, 1774, at Portsmouth, when a committee of correspondence was formed for exchanging information with similar committees from other colonies. He was a delegate to the convention at Exeter, New Hampshire, July 21, 1774, which appointed representatives to the first continental congress at Philadelphia and two later conventions at the same point, and was one of the famous committee of safety, composed of nine members appointed by the first provisional congress, May 17, 1775. From June 29 to October 31 he was absent in the service of the state, during which time he acted as mustering officer and was commissioned August 24 as colonel of the first part of the regiment, lately commanded by Colonel Josiah Willard. Samuel Ashley was appointed June 10, 1776, first justice of the inferior court of common pleas of Cheshire county.

In 1776 the house of representatives voted to raise four companies of fifty men each to guard the western frontier, and Colonel Ashley was delegated to enlist, muster and pay one of these companies and deliver the commission to the officers whom the company might elect. In the following July, Colonel Ashley was appointed to muster men for the reinforcement of the army in Canada, and on the requisition of General Gates he marched his regiment October 21 to reinforce the army at Ticonderoga.

On May 3, 1777, he was requested to raise as much of the militia as possible and march to Ticonderoga. Accordingly, on May 7 he proceeded with one hundred and nine men. and served until June 18, when he was discharged. He enlisted June 29. and was present at the evacuation of Ticonderoga by the American forces, receiving his discharge July 11. By this action the subjection of New England was threatened.

Colonel Ashley immediately volunteered on General Stark's staff and served as brigade major at the battle of Bennington, receiving his discharge September 25. He continued in the service under General Gates at Saratoga until Burgoyne's surrender. He received from General Gates a letter of thanks for the spirit and expedition with which he in common with others came to the support of the Northern army. From this letter is quoted,

I now dismiss you with the honor you have so well deserved. I also certify that neither you nor any under your command have received any pay or reward from me for your service on this occasion. That I leave to be settled by the general congress with the convention of your state.

Colonel Ashley continued in command of his regiment, the 13th, afterwards the 6th New Hampshire, until he resigned, June 18, 1779. On March 24 of that year he had been chosen a representative to the continental congress, but did not accept. About 1782 he removed to Claremont. He had been associate justice of the court of common pleas for Cheshire county from 1776 until then, and about that time was appointed chief justice, a position he filled until July, 1791.

Colonel Ashley had a strong sense of humor, as indicated by nicknames he gave his sons Snarling Oliver, Social Samuel, Xoble Daniel, Numhead Luther. From his monument in West Claremont cemetery:

Blessed with good natural talents and a heart rightly to improve them, he in various departments of civil and military life exhibited a character honorable to himself and useful to others, having presided for several years in the lower court of his county. Probity and fidelity displayed the virtues of the patriot and Christian, as well in public as in domestic life. The smallpox put a period to his earthly course, February 18, 1792, aged seventy-one years.